Government and People of Nicaragua Extend Congratulations to Prime…

For a person to qualify to register on the voters list, they must be:

Citizen of Saint Christopher and Nevis or,

a Commonwealth citizen and has lived in St. Kitts and Nevis for a period of 12 months before the date of registration on the voters list.

How you can Vote

When you get to your polling station, you join the line or enter the station if there is none.

When you enter the polling station give your name and address and voters ID to the election official at the check-in table.

The official will then instruct you on what to do if you need help.

When you can Vote

Federal Elections in St. Kitts-Nevis are constitutionally due every 5 years.

On Election Day Polling Stations are usually open from 6am to 6pm. Employees must be allowed time away from their job to vote.

Where you can Vote

Polling stations will be set up in each Constituency by the Returning Officer. They are usually centrally located, and may include such locations as Schools or Community Centers.

Polling locations may change from one election to another so it is important to determine your polling location before each election.

The location of polling stations will be publish prior to an election.

The people who work at a polling place are referred to as poll officials.

To take the vote and manage the process, there are two election officials at each polling place: the Deputy Returning Officer and the Poll Clerk. They use the Voters List for their poll and carefully record the events of the day in their Poll Book.

In addition, candidates or their representatives may be present to observe the voting process.

What happens when you Vote

When you arrive at your poll, you will proceed to the table where the Deputy Returning Officer and the Poll Clerk are seated. Even if your name is already on the Voters List, you must take your voter’s ID to the poll when you go to vote.

The poll officials will locate your name and address on the Voters List, cross it off, enter your elector number into the Poll Record, and hand you the ballot paper. You will then proceed to the voting room and mark your ballot in privacy.

You return the marked folded ballot to the poll officials who verify that it is the same one that were originally given to you.

The ballots are then returned to you. You then place your ballots in the ballot box.

An election allows those eligible to vote (the electorate) to decide who should represent their views and interests. Elections are held at regular intervals to enable the population to change their representative if they no longer feel that the current postholder best represents those views and interests.

Fair and free elections are an essential part of a democracy, allowing citizens to determine how they want the country to be governed.

STAGES OF THE ELECTORAL PROCESS

The Parliament of St. Kitts & Nevis is comprised of the Speaker, elected members of the Government and Opposition parties (11), appointed Senators (3) and the Attorney-General when not an elected member. Parliament, also called the National Assembly is the sole institution through which laws of the Federation of St. Kitts & Nevis are passed, taxes imposed, and public expenditure authorized.

Under the Constitution, Nevis has considerable autonomy and has an Island Assembly, a Premier, and a Deputy Governor General. Nevis has its own legislature, premier and administration. The Nevis legislature, the Nevis Island Assembly, has five members elected by universal adult suffrage and three nominated members. The central government legislates for Nevis in matters concerning overall policy formation. Under the constitution, provision is made for the secession of Nevis at six months’ notice, after a two-thirds majority in favour in the Nevis Assembly and a referendum, also with at least two-thirds in favour. 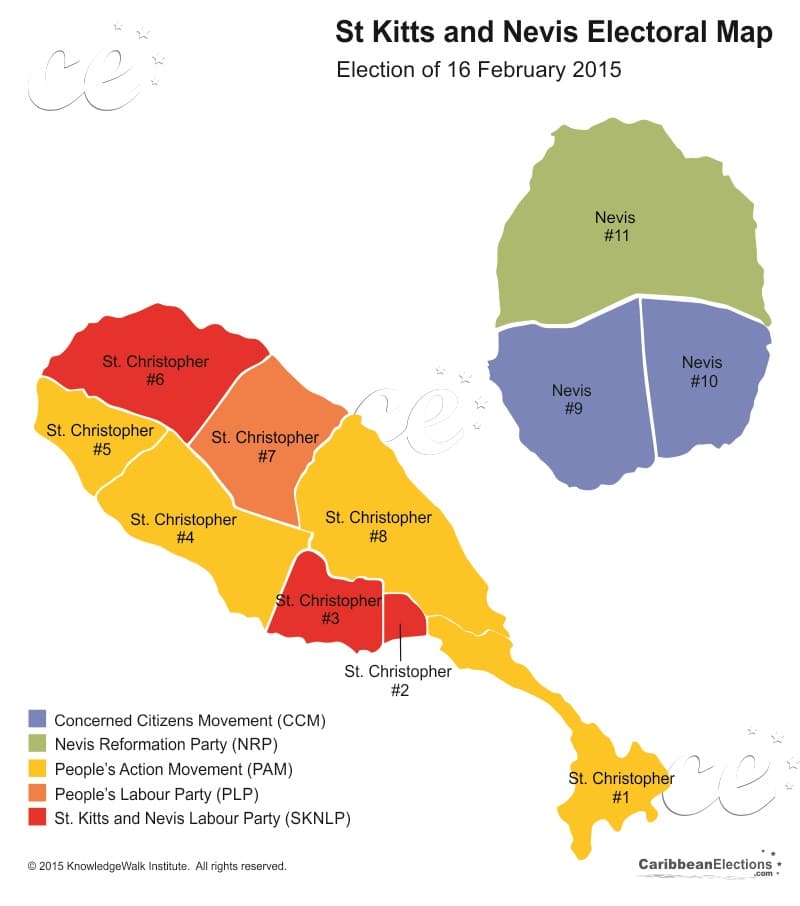 General elections were held in Saint Kitts and Nevis on Friday 5 June 2020.

The ruling coalition, Team Unity consisting of PAM, CCM and PLP, won a landslide victory with nine out of the eleven directly elected deputies.